A Fixed Gear bicycle and/or Fixie is a bicycle with one gear similar to a single speed.  The difference being, the gear on the rear wheel is fixed in place on the hub with no bearings or freewheeling mechanism involved in this gear system that would provide the rider with a reprieve from pedaling. Fixed gear folklore is always romantically tied to the idea that the lack of ability to stop pedaling is a metaphor for life, because once you stop moving forward, that's when the bad stuff happens.  It's a simple metaphor.  Simple. 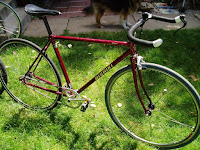 My first picture on Facebook was a picture of my first Fixed Gear.  It sounds like the punch line in a bad joke about hipster culture. It's the one above with Lenny in center.  Lenny was rad, but that bike was pretty rudimentary. That bike was originally a red hunk of Nishiki I bought for $10 at a garage sale.  I bought some parts from the Pedal House, made it a fixie with a brake, Powder Coated that bike Gray, eventually gaining enough confidence to ditch the brake. I ended up giving it to a kid who loved it. That bike was simple.

I remember taking a lot of simple bikes and finding ways to make them way more complicated.  In fact, I became infatuated with how much work we put into making something so simple. 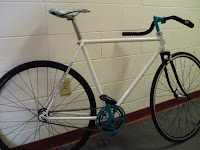 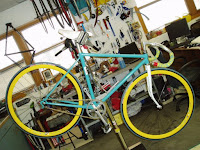 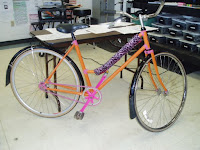 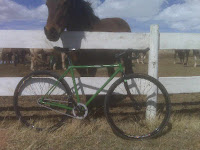 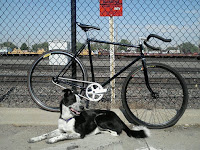 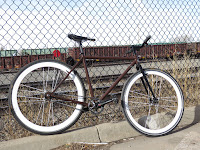 For those of you who know me, you know I can be kind of picky, so I started looking for a more perfect frame.  My original bike was fine, but I wanted something that was not an every day kind of find.  I wanted my bike to be somewhat unique, but simple.

As much as I wanted to, there was no way I could cut up and repaint that Irish Made Raleigh bike.  Nope.  So I decided that an old 1980's Trek was due for some simplification.  I found the frame in a junk pile and bought some more stuff from the Pedal House.  This is around the time I met my friend Joel.  He was a new Mechanic at the shop.  When I met Joel, when he first came to town, he might not want me to tell you this, but he rode a fixed gear. The makings of a true hipster bromance, were it not for the fact that we were both into fixed before it was cool. He was the the one to show me the possibilities that brazing would provide. He brazed a new set of dropouts on my bike.  Track drops from Paragon Machine Works. We drank beer and made my bike a one of a kind.  It was simple.
I really liked that bike. It was a 1980 Trek road bike that I ended up powder coating to look like a John Deere tractor. It was a fantastic ride and after we brazed on drops, sandblasted the frame and powder coated what was once a perfectly good frame, it was simple. 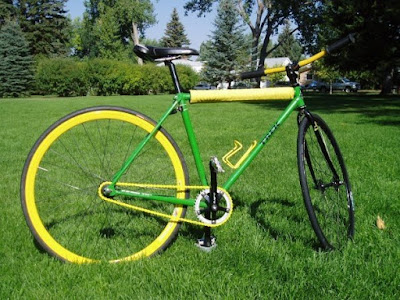 I rode that bike every day for two years, but eventually someone made me an offer I couldn't refuse and I sold it.  As much as I liked that bike, I didn't love it. It was a mixture of parts that other people made, a virtual Frankenbike, and I was okay watching it ride away into the sunset. After that bike, I cycled through a couple of different track bikes. This next pic is my first day on my new All City.  They do a fantastic job making an attractive bicycle that is also the good type of simple. 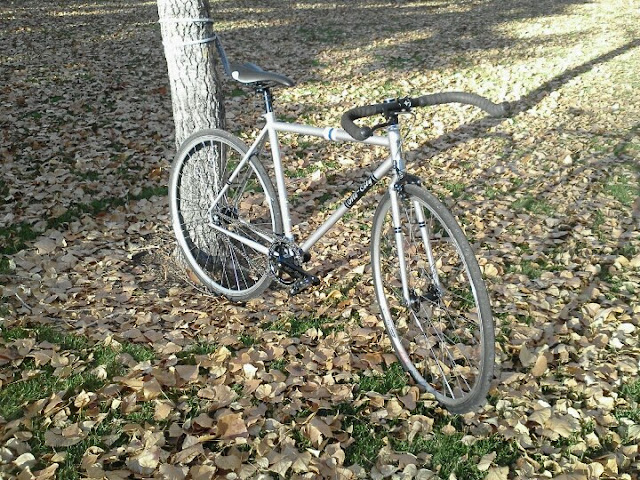 I have never really been the type to become too attached to any bicycle, it's sort of always been about the next ride. I started shifting my infatuations with the new technologies that were blossoming, full suspension, disc brakes, or whatever.  There was so much to explore.  I found so many different bikes I stopped looking for a fixed ride. After all, I never found a bike that I fell in love with. But the Pedal House has provided me many opportunities, and one day a frame walked into the shop. At first I just liked the name, "Rory O'Brien", but it wasn't something I was too into.  I bought it and stashed it in the basement for another time.  Months later I was cleaning when I rediscovered the bike and decided to take a closer look. It fit, so I thought I should ride it. It was a road bike from England, made by an Irish builder named Rory O'Brien.  I had a plan, and it was simple. 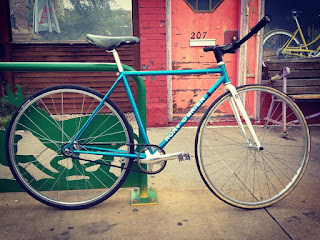 The O'Brien came to me as a 5-speed road bike, but all I really wanted for my project was the frame.  I built it up as a fixed gear with some stuff I had laying around, but the saddle and the front wheel came on the bike. After a few weeks of riding I decided this was my new project bike. My first order of business was to build up a new fixed wheelset, All City Hubs, DT Spokes and Nips, and Velocity Rims. I also got a new All City fork and started planning the rest of the project. It was dope.  And simple. 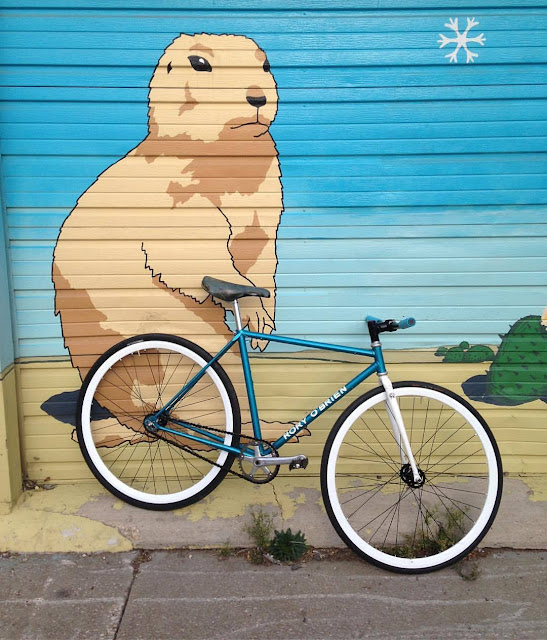 The Gopher pic is how I rode Rory last summer.  I decided that this was my bicycle. I decided to do the same things to these drops that we did to the trek back in the day.  This time, I did all the work myself under Joel's tutelage. I had a few rules.  1. I know this is stupid to say about a bike I was going to chop up, but I wanted to try to keep the frame as original as possible.  2. No shortcuts. 3. Have fun. 4. Keep it simple

SIMPLE!
Posted by Your Friendly Neighborhood Bicycle Mechanic! at 10:06 PM

Your Friendly Neighborhood Bicycle Mechanic!
Laramie, Wyoming, United States
The Pedal House is Laramie's oldest bicycle shop, and we are the only locally owned, bike shop. We pride ourselves in being professionals who ride bikes, drink beer, and keep up with what is next in the industry. Bikes are our only concern. Nothing more, nothing less. When we say bike shop, we mean bikes only, no extreme kites, snowboards or other hobbies. #morethanasticker